What Do Snails Eat in the Wild or as Pets?

As an Amazon Associate I earn revenue from qualifying purchases at no cost to you.

With over 43,000 known species and more being discovered all the time, snails are a fascinating and surprisingly diverse collection of animals. According to the scientific definition, snails are any gastropod mollusk with a shell. But what do snails eat? What about their different eating habits?

What snails eat is determined by their natural habitat and the types of snails they are. Plants, fruits, vegetables, algae, and plants about to die are examples of conventional foods. They also eat sand or soil in search of calcium to build a thicker shell. On the other hand, carnivorous snails only eat meat.

Slugs and snails are more closely related to octopi than insects, and they belong to the Phylum Mollusca. Slugs eat with a jaw and a radula, a flexible band of thousands of tiny microscopic teeth. The radula scrapes up food particles while the jaw chops off larger pieces of food, such as leaves, to be rasped by the radula.

What Do Snails Eat?

Snails are herbivores who can consume and eat a wide variety of veggies. The veggies on this list are acceptable for most snails, whether in the wild or a terrarium. Vegetables to consider include:

Snails also devour fruits in large quantities. It can be beneficial when feeding your snail pet, but it is also one of the reasons snails are considered pests. Snails will consume the following fruits:

They also require a calcium supply. It can be done using a cuttlebone, a piece of plain chalk, or eggshells. Calcium is necessary for the shell to remain strong. Snails despise being dry. Thus, water is constantly provided. To avoid mold, uneaten snail food should be removed after two to three days.

1. What Do Snails Eat in the Wild?

Snail eating habits vary depending on the types of snails. They eat a wide variety of foods, but some snail species are picky eaters. Some species will "work" harder to get the food they like, but others will be "lazy" and eat whatever is offered.

Snails will happily consume a variety of green leaves, alive or dead plants, fruits, and vegetables. They can eat mushrooms, tree bark, and stems, among other things. In the act of cannibalism, snails eat baby eggs because of the high calcium content of eggshells to supplement their diet.

2. What Food Do Sea Snails Eat?

With tens of thousands of different snail species of varied sizes and forms, sea snails are arguably even more diverse than land-dwelling snails. Aquatic snails that live in the ocean breathe through their gills and spend all their time there. A few species can breathe air through a single lung.

As a protection measure, most sea snails have spiral-shaped shells that they can hide inside. In addition, most known sea snails are herbivorous, which means they eat plant matter when submerged.

The radula of a herbivorous sea snail is used to scrape algae, seaweed, and other plants from rocks and other surfaces on the ocean floor. The radula's thousands of tiny teeth scrape up plant material and then chop it up into bite-sized pieces that fit down their throat.

Carnivorous sea snails, such as the cone snail, employ poison or other unusual means to consume prey, such as the moon snail's proboscis. Cone snails use their modified radulae to shoot deadly venom into their victims before enveloping and slowly eating them alive.

Moon snails prefer to hide in the sand until they are approached by an animal such as a bivalve or another unfortunate snail. A moon snail will quickly encircle their victim as it gets near enough before boring a hole in it with its sharp proboscis. They then suck out the animal's organs and flesh with their proboscis to eat!

Sea snails eat a variety of items, including:

3. What Food Do Land Snails Eat? 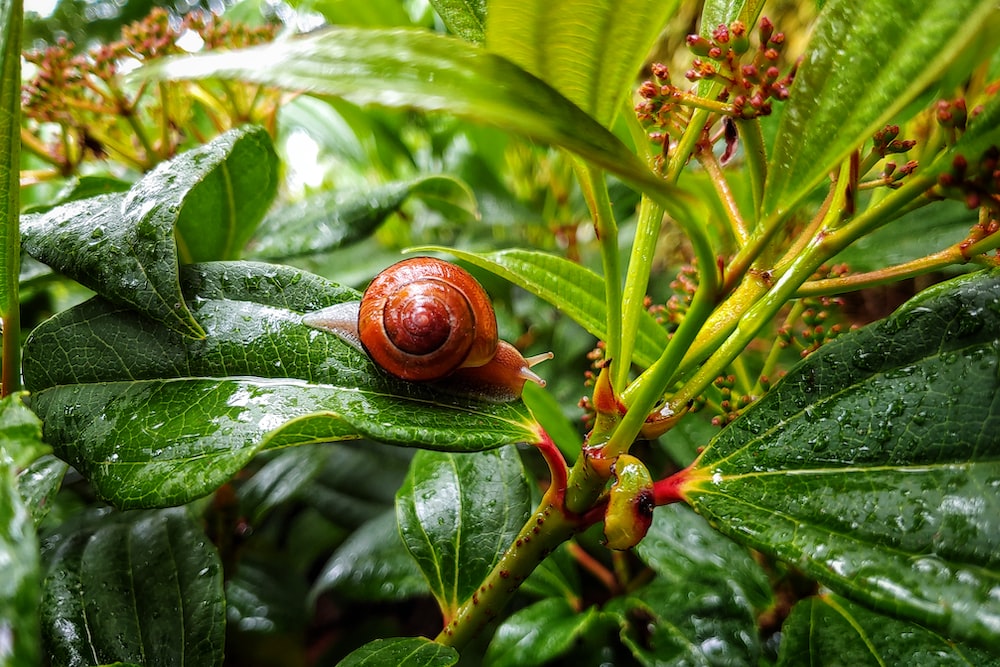 Any snail that lives mostly on land, such as the common garden snail, Cornu aspersum, is classed as a land snail. Although many land snail species shift between terrestrial and aquatic life, the fact that they spend most of their time on land is their distinguishing attribute.

Land snails flex their muscles along their long, one foot to move from place to place, searching for food. They release mucus from it so that they can navigate across a variety of rough surfaces without losing their body moisture. When they come upon something they wish to eat, they use a radula, which is a mechanism linked to their jaw.

A radula is a tongue-like organ covered with small, sharp teeth called denticles. Garden snails use it to scoop up and cut their meal into small bits before consuming it! Land snails may change the force of their radula scrape depending on what they're eating.

Land snails can eat almost anything their squishy little bodies can digest, including small insects, plants, and animal feces. Some are strictly carnivorous or herbivorous, but many species are extreme omnivores that eat a wide range of organic matter, including dead plant matter. Land snails typically eat the following:

4. What Food Do Freshwater Snails Eat?

Snails that reside in bodies of water such as lakes and rivers are classified as freshwater snails. There are over 5,000 species of freshwater snails, the majority of which belong to the Pulmonata or Prosobranchia subclasses.

Most freshwater snails, such as Pomacea maculata or apple snails, are herbivorous. Some are also detritivorous, meaning they eat rotting plant and animal debris. They eat a variety of foods, including:

5. What Food Do Pet Snails Eat?

If you've got a new pet snail in a terrarium or another comparable environment, you'll need to give it food and water. The simplest method to figure out what to feed a snail is to put various foods in its habitat and see what it loves. Lettuce, cabbage, apples, and cucumbers are good to start.

It's a good idea to keep the snail food in a small dish in the cage, making cleaning the habitat easier. Other ideal foods for a pet snail include:

Snails have an intriguing trait in that if they aren't provided a range of foods to consume, they can become bored. It means that your snail's diet should not be limited to just one or two foods. Keeping your snail friend satisfied requires variety.

Snails require calcium in their food to maintain the health of their snells. A snail's shell can thin out and crack if it doesn't acquire enough calcium. You may ensure your snail gets adequate calcium by giving it ground eggshells, natural chalk, cuttlebone, or calcium powder, which is found in most pet stores.

When feeding a pet snail, keep in mind that they'll eat till they're full. You don't have to be concerned about overfeeding your pet snail; simply provide a variety of foods in its food bowl and replace any that go bad. A snail will eat roughly 10% of its body weight in a single day, which isn't much food when you think about it.

Natural meals, not manufactured foods like rice, bread, or pasta, should be fed to snails. They should also avoid sugary items such as candies and cookies. Snails should never be fed salt since it dehydrates their bodies and causes them to perish. Onions and citrusy foods are not appropriate food options for snails since they are high in acid.

Snails, like other living beings, cannot survive without water. It's okay to supply a little dish with some shallow tap water for your pet snail, but the majority of the water it requires will come from the food it eats and the surroundings it lives in. Just remember to feed your snail fresh food and keep it in a humid but not too dry habitat.

The majority of land snails are hermaphrodites, which means they have both male and female sex organs and can produce eggs and sperm. However, they must mate to fertilize the eggs. Your snails are presumably courting or breeding if they press their heads together, which is where their genital openings are located.

Snails lay spherical, transparent eggs in groups of up to 100. Provide lots of protection, such as plant leaves, small wood pieces, or moist dirt, where the snail can dig a shallow tunnel if you want baby snails to hatch. Eggs hatch in two to 45 days, depending on the species. You can feed and care for them exactly like adult snails once they are born.

What do snails eat? What snails eat is mostly determined by their species and geographic area. There are thousands of distinct snail species worldwide divided into land snails, freshwater snails, and saltwater snails.

Most snails are herbivores, meaning they only eat plant-based food such as leaves, vegetables, fruit, and so on. However, snails can be omnivorous, which means they eat both plant- and animal-based food. Carnivorous snails are those that only eat flesh.