As an Amazon Associate I earn revenue from qualifying purchases at no cost to you.

The types of flower plants in a garden described as below-

It’s a special type of plant which appropriate for rock gardens because of its nature (short height and small leaves). They don’t produce woody shoots but it still hardy plant. Although it’s a perennial plant its leaves fall down as well as stems usually die in the winter season. In spring it appears a new look full of small new leaves and new shoots. There are some evergreen species of rockery perennials.

These plants not only used in rock gardens but also in a mixed border and herbaceous which create a better look when they used in front of them. Rockery perennials have long term effects on a garden because they are permanent features of a garden. Rockery plants height always less than 1f (30cm) and it is the root difference between rockery perennials and border perennials. Without some exceptions border perennial plants height always more than 1 ft (30cm).

These plants are less used in rock gardens but more used in a mixed border and herbaceous. They are mostly used in mixed borders. Just like rockery perennials, border perennials have long term effects on a garden and they are a permanent feature of a garden although some of them live only a few years many of them have long lives.

The definition of the annual plant is which plants are lived in a single round of the season. They grow from seed and then flowers and then dies. The seeds of annual plants sown outdoor into suitable soil in spring and they grow up a hardy plant that can fight with frost.

Seeds are also sown in the previous autumn of the season. The growth of annual plants has several ways such as sowing seeds and also raising in bed and setting out later.

Despite half-hardy nature, these types of plants are very frost sensitive which can’t tolerate frost. Because of lack of tolerance they spent their winter indoors. After completion of frost-weather, they return to the garden. Because of this reason they are overwintered plants. They grow as a green plant (Pelargonium), tubers (Dahlias), or as roots (Chrysanthemum). Tender perennial plants are used in beds, borders, and containers.

Bulbous plants have a wonderful character i.e they produce a fleshy storage organ under the soil called the bulb. This storage organ has economic importance that is used for planting in the dormant state. Trus bulbs are consist of leaves, stem, stem bases, tubers, and rhizomes.

Bulbs are permanent members in a garden because they are staying in the soil to flower every year. Sometimes they formed a large clump and lifting become difficult. Overcrowding of some bulb plants such as Crocus, Snowdrop becomes a threat for other plants, and lifting is very necessary at that time. But one thing should remember don’t remove the leaves after flowering because plant’s food is produced in the flowering stage.

This type of plant grows in high humidity and humus-rich soil and doesn’t allow dry out. But they can’t survive in permanently waterlogged soil. Because of having damp soil with rich humus soil around a pond is suitable for bog plants. Water application is needed for bog plants in the winter season when the weather is very dry.

The main difference between bog plants and other plants is their habitat. The examples of bog plants are Astilbe, Humerocalis, Lysichiton, etc.

Flower plants which are generally transplanted from seedbed to main garden place in the leafy stage are known as bedding plants. Bedding plant species are also transplanted in a container for displaying for a fixed period. These species specially cultivate mostly for foliage because they have wonderful leaves. However, a pelargonium is a genus of flowering plants that kept indoors as a “flowering house plant” or a “greenhouse plant” the same species planted outdoors in summer is a bedding plant.

Bedding flower plants generally planted in lines, circles, and geometric blocks in order to fill the flower bed but nowadays this tradition has declined. At that time, flower beds tend to much irregular in size and they used to fill the pockets in a mixed border or rockery. Because of booming in container growing bedding flower plant’s interest increased nowadays.

Plant types such as rockery perennial, annual, biennial, border perennial, tinder perennial are used as bedding plants. Annual plants like Salvia, Begonia, Petunia, Lobelia are the most popular bedding flower plants which are half-hardy and raised from seed. Alyssum, Clarkia, Godetia, and Nigella are the example of hardy annuals which are used as bedding plants and they are sown directly where they are to flower. Bellis, Myosotis, Cheiranthus are the example of biennial bedding flower plants.

The example of rockery perennial are Diascia, Viola are used as bedding plants. Border perennial plants such as Polyanthus and Fuchsia are used as bedding flower plants also. Tender perennials such as pelargonium and Fuchsia are the two most popular bedding plants for a long time. Nowadays, Eustoma, Canna, Cuphea are the popular plants at the garden center.

The types of flower plants in a garden which describe above have much importance and knowledge of them is useful for a gardener.

You can read the article on: How To Kill Grasses in Flower Beds 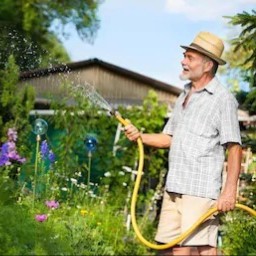