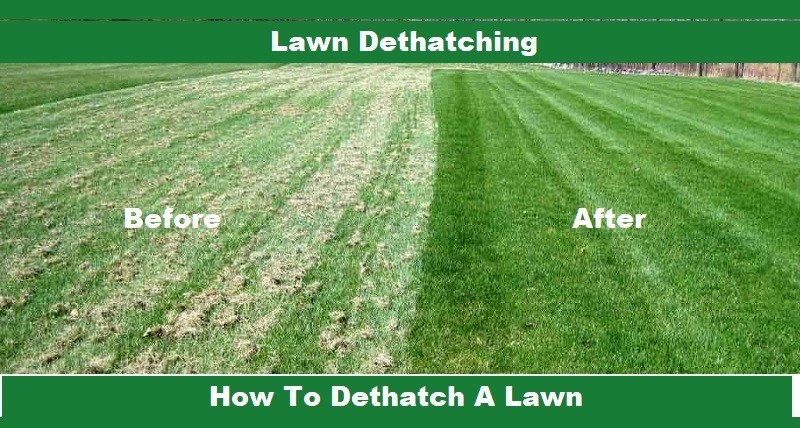 Best 6 Tips of Lawn Dethatching: How to Dethatch a Lawn

Thatch, Dethatch, and lawn dethatching: Thatch is a mixture of living and non-living or dead plant materials like stems, roots, and crowns that formulate a layer between the green vegetation and the soil surface. It is a decaying material of the dead and the compressed portion that is very harmful to your lawn as we know it can hold water and nutrients from dripping down to the roots, and they are vulnerable to heat, drought, and stress.

A thin layer of thatch is beneficial for your lawn as it acts as a good turf a bit of bounce. It also acts as an organic mulch that conserves the soil moisture, maintains soil temperature, and protect soil from erosion. This type of thatch keeps the soil moist, decreases water loss, and improves tolerance to foot traffic. To make a healthy lawn you must remove the thatch portion which is more than one inch and prevent air reaching to the soil. The removal of this thick layer is called dethatching. Different grass produces a different layer of dethatching. In this article, we’ll know the following things.

Dethatching is a harmful process for your lawn and it can cause serious damage to your lawn. When the grass is in the growing stage, you must do the dethatching process so that the grass can fix its damage before the dormant period. It largely depends on the growing season of different grasses. The two types of grasses are available which have different growth patterns is cool-season grasses and warm-season grasses.

The dethatching for these types of grasses should be done in the early spring or in the early fall (late September) since this is the prime time for the growth of the grass.

You may notice that the soil should be moist, not dry at the time of dethatching. Water the lawn thoroughly two days before the dethatching. You must operation your dethatching machine at least three times in a different direction. Then collect and remove all the dethatch portions.

There are various forms of dethatching machines that are available in the market. You may also hire this machine from lawn services and rental companies. It works on a different level according to its varying level of intensity. In this article, here are some of the dethatching procedures that I am going to tell you below. Some are a stand-alone, powered unit. Some others are made to be dragged behind a tractor or riding mower. You can hire a lawn care professional to dethatch your lawn. If the layer of thatch is more than 2 inches, it is the best option for you to hire a professional.

A tine rake dethatcher is mainly fixed on a mower or tractor but the handheld version is also available in the market. The operating system of this machine is using the thin metal line which scraps the soil of your lawn. It can draft up the dead grass or leaves by loosening while mowing. It is mainly a spring season tools that fix on your mower or tractor. It is a less laborious and less time-consuming process. It is mainly used in a small amount of thatch on a small lawn.

Vertical mower pulls out the thatch from the soil. Sometimes they often take grassroots along with it. It is mainly used in a thick layer of thatch. After dethatching, you must collect and remove all the excess thatch by raking up. Then water the lawn thoroughly and fertilize it.

Core aerator machines make core aeration of your lawn. It works by penetrating the soil of your lawn with a hallow metal tines. It can pull out plugs or cores of your lawn and create many small holes. When these metal tines go through the soil, it can break down the thick thatch layer and grab it out. This machine also increases the airflow in the soil which can facilitate different microbes to break dawn this thick layer. Core aeration is very important to fix up the small to medium thatch problems.

If you find an all-in-one machine than slit seeders are the best option and you can find it in some professional lawn care companies. They can pull out the thatch from the soil by a set of spinning blades and other circular blades lay down the grass. It functions as it dethatches the dead grass or roots or stems and sows the grass seed at the same time.

It is one of the best machines which can use both small and large lawns. You need to collect all the dethatch portions with several lawn bags by gathering them with rake or mower and make a heap at the corner or outside the lawn.

In the case, if acute thatch problem the only solution to deal with it is to use a power raking. It can also be referred to as a dethatcher. You must notice when you purchase or rent this machine that is it can do the job according to your plan. It must cut slices the lawn soil and grab out the thatch. You must care about this machine as it can destroy your grass.

Sod cutter machine is used for the most serious thatch problems that layer it more than one inch. Thick blades which can go through the soil surface to cut and remove sod in lines. You need to regenerate your lawn if you use a sod cutter.

Clean up all the debris with a mower or rake and make a heap at the corner or on the compost pile then water the lawn thoroughly. After dethatching your lawn it is a great time to aerate your lawn. After aerating observed and fertilize your lawn. It may take 3-4 weeks to recover and show signs of new growth of your lawn.

After all, We hope this article will be helpful for lawn dethatching and making your lawn more beautiful.