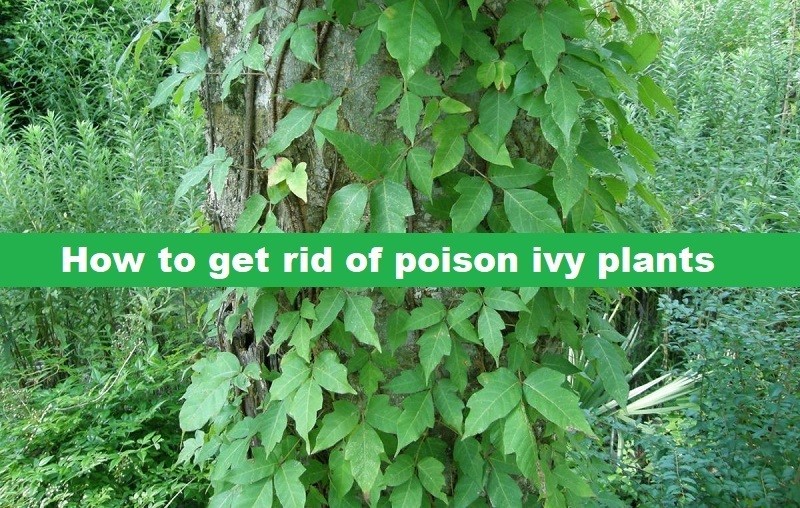 How to get rid of poison ivy plants: There are millions of plants around the world that are comparatively more or less beneficial to us according to our demands for uses. Some of them directly give us food, shelter, furniture equipment and some of them helps us indirectly like ornamental plants, an aesthetic group of plants, etc.  Although whole plants are responsible for giving us oxygen to survive and reduce carbon dioxide from our environment, there is a group of plants that are seriously problematic for human beings. Poison ivy is one of them.

Poison ivy is grown in the garden and thrives itself all over the plants and scattered around the garden. The scientific name of poison ivy is Toxicodendron radicans which belong to the Sapindales order. It looks a lot like oak or likes furry raspberry (which we don’t want to kill). But the plant poison ivy which we want to kill causes of having some bad effects upon our body skin.

Why do we want to kill poison ivy?

In the 17th century, It was found too much irritating for the human body upon discovering the new world in 1623, which was noted by Captain John Smith. Having touched the plant body to the human skin creates too much itching and shows redness then lastly causes blisters. It usually takes within a week but it can last as long as 3 weeks.

The plants create a rash that looks like patches or streaks of red and raised blisters. The rash usually doesn’t spread if the urushiol (an oily substance secreted by the plant’s leaves and stems) is not still in contact with the body or skin. The redness, itching, and blister are the serious issues that 400 years later homeowners or gardeners are still trying to get rid of this problematic plant.

How to identify poison ivy plants?

This section is too much important that we should be careful about. There could be various types of beneficial plants in your garden which you don’t want to kill. Some usable plants could arise beside poison ivy too and some of the plants might look the same as the poison ivy; such as poison oak or furry raspberry. Then how can we identify them to destroy?

A poison ivy plant contains a cluster of three leaves. These leaves are pointed and in the matured stage the leaves have ridges along their edgeth. Don’t mix the plant with Virginia creeper which has the same look as the poison ivy instead of having a cluster of five leaves.

In spite of this, if you are not sure whether the plant is poison ivy or not then you should put on a pair of heavy gloves and then snip off a cluster of leaves by your hand and then examine that closely. You might take help from the photos or videos of the internet or you can go to your local nursery along with the plant leaves. We think it will help you definitely to identify the plants.

How to get rid of poison ivy plants

We have already known from the above description that how much a poison ivy plant can create problems for our body skin as well as their identification. Now we should think about how can we get rid of them. In order to get rid of poison ivy, you can use two methods. One of them is a natural way and another defines to use of chemical compounds. Chemical compounds may work for you comparatively faster than natural systematics but one thing you should keep in mind that the chemicals you will use to remove poison ivy should be friendly to the environment.

How to get rid of poison ivy plants naturally without chemicals

There are some ways that can help us to get rid of poison ivy plants naturally without chemicals. These

In order to kill weeds or any targeted plants boiling water is a worthy treatment. We can say it is a natural chemical to kill an enemy. It will kill anything it touches including plant, tree, weeds, herbs, shrubs, etc. You should boil some of the water in a pot then pour the boiled water in a spray jer then you have to spray upon the plant poison ivy. It will kill its leaves, stem that it touches on the upper surface. But the roots under the surface may survive and may result in the new growth of poison ivy. You should pour the boiled water onto it as soon as you see the emergence of it again.

You can use your own hands to remove it from your garden. Put on long sleeves and pants and gloves that the leaves can’t touch your skin. Then you have to dig out the soil few inches (at least five to six) beside the plant deeply as much as you can. The labor is to get the root. When you get the root into the soil, you have to pull them out. This work will be easier for you if the soil is softened enough. So you can start your job to get a better result after a rainy spell in your garden.

You should keep in your mind that the chemicals you will use could perform faster and easier but it may damage the other plants beside the plant too in your garden. So you should choose your weed killer wisely. Roundup and Brush-B-Gone are two common chemical treatments used to get rid of this plant. Their respective active ingredients are glyphosate or triclopyr deal with the poison ivy and act faster to remove them out from your garden.

You can use your DIY homemade weed killer to get rid of poison ivy. These potions are chemicals but are comparatively better friendly to nature than the other chemical products. It includes salt, dish soap with water, and vinegar too.it will decrease your cost and labor in order to remove them. These things are common in a home or residential area. You will easily find these elements and can prepare a natural homemade remedy for the problematic plant.